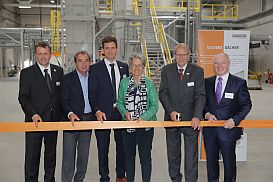 The roof specialist Bauder recently opened its first production plant outside of Germany in Bruck an der Leitha.

As a result, Lower Austria is now the site of Europe’s most advanced manufacturing facility for bituminous membranes as well as new office and storage space and a superbly equipped training center, all constructed at a cost of almost EUR 30 million. Some 30 employees work in Europe’s most state-of-the-art production facility for bituminous membranes.

Bauder ranks among the most important European manufacturers of roofing systems and products for sealing, insulation, greening and generating energy. The company generates annual revenue of EUR 525 million and employs a staff of 885 people. Up until now the family-owned company which dates back close to 160 years has manufactured its products at the main plant in Stuttgart, Germany as well as in five other factories. The location in Lower Austria is optimal to drive its expansion to South East Europe and to more effectively supply the Austrian market.

One of Austria's key strengths as a business destination is its highly qualified and motivated skilled workforce for research and development, especially in the scientific sector.

Restarting Growth in Central and Eastern Europe: Drivers and Barriers

Professor Arnold Schuh (Vienna University of Economics and Business) shares his insights on the economic recovery in CEE.

5 Reasons in Favour of Launching Your Startup in Austria

Close to 40,000 new companies were founded in Austria in the year 2019. More than 9,000 of them, or close to one-quarter of the total, were established in the capital city of Vienna, making it the startup leader. 20 years ago the number of companies founded in Austria was less than 20,000 (Austrian Federal Economic Chamber). It is clear to see that Austria has become more attractive as a business location. Why is this the case? What the reasons for establishing a company or startup in Austria?