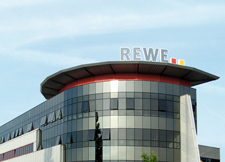 Rewe International now manages the food discount retail store chain Penny from Austria instead of Germany as in the past. The operations of about 4,000 outlets in ten countries will now be coordinated form Wiener Neudorf (close to the city limits of Vienna). Total revenue will thus rise to approximately EUR 16 billion. Annual investments will increase to EUR 800 million compared to an average of EUR 400 million.

30% of total revenue of the German Rewe Group is generated by Rewe International, which not only encompasses the business in Austria but also the subsidiaries in Eastern Europe and Italy.

Revenue in Bulgaria, Croatia, Russia, Slovakia, Czech Republic and Ukraine climbed by 7.18% in 2016. The Group modernized close to 50 stores in Eastern Europe in 2016, and opened 50 new shops in the region.

Rewe is the largest food retailer in Austria with a market share of 35.3%, employing more than 42,000 people. At present Rewe is training about 1,700 apprentices.

Vienna is a beautiful city and a natural place to be for Trask. We are happy that we can introduce our great technology expertise together with revolutionary ready-to-use solutions to Austrian banks. And thanks to the cooperation with ABA everything is a bit easier.