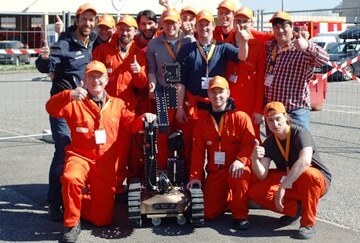 Last week the Viennese company taurob, together with its research partner, the Darmstadt University of Technology, was announced as the winner of the ARGOS Challenge, the robotics competition sponsored by the multinational oil and gas company Total S.A.

In a three-year competition, five prominent international teams competed against each other to develop a robot for routine, inspection and emergency operations on oil & gas drilling platforms.

The acronym ARGOS stands for Autonomous Robot for Gas and Oil Sites, which means that the robot independently performs the tasks assigned to it. If necessary, an operator can intervene at any time via satellite-based connection from land and take control of the robot.

ARGOS can measure temperatures and gas concentrations, detect abnormal noises, obstacles and people around them, and safely manoeuvre on wet stairs. Adverse environmental conditions, such as heavy rain, extreme temperatures and wind speeds do not pose a problem for the robot.

“Our robot is also the first fully automated inspection robot in the world that can be used safely in a potentially explosive atmosphere,” says Lukas Silberbauer, who founded the company taurob in 2010 together with his colleague Matthias Biegl, founded the company taurob in 2010. The reason behind it, the robot is already fully ATEX certified, so that it doesn’t trigger an explosion while operating in potentially explosive gases.

The Austrian company could capitalize on their knowledge obtaining this certification during their first project: a robot for fire fighters. “When we heard about Total’s contest, we immediately realized that this would be a great opportunity for us,” says Matthias Biegl.

Total has announced that it will use the new robots on its oil drilling rigs starting in 2020.

The project was supported by the Austrian Research Promotion Agency FFG within the context of EUROSTARS (co-financed by the EU).