“Economist” certifies that Vienna has the highest quality of life 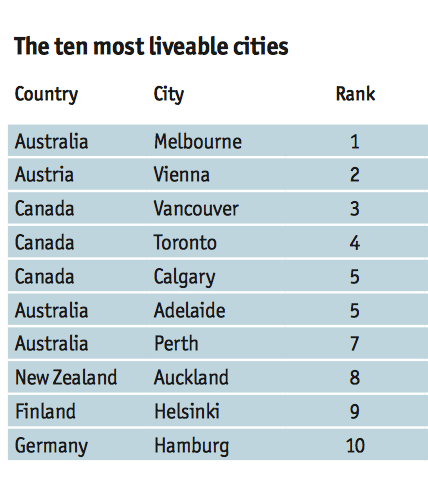 Who would not like to work in one of the most liveable cities in the world? The business magazine “The Economist" once again rated Vienna second in the world in its annual global ranking of the “Most Liveable Cities”.

The ranking takes 30 factors into account such as health care, culture, environment, education, infrastructure as well as the danger of terrorist attacks. 140 cities around the world were compared.

Melbourne was rated first in the world. Vancouver, Toronto and Calgary (3/4/5) in Canada were also rated among the top ten, accompanied by two other cities in Australia, namely Adelaide and Perth (5/7), Auckland in New Zealand, the Finnish capital of Helsinki (9) and Hamburg (10).