CES: Austria is one of twelve innovation champions 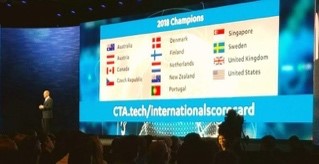 In the "Innovation Scorecard" study presented in Las Vegas, Austria is listed as one of the twelve most innovative countries (“innovation champions”) in the world.

This analysis closely evaluated important areas in the innovation policies of individual countries and compared them on the basis of twelve categories. A total of 38 nations were examined.

The assessment categories used in the Innovation Scorecard include the attitude of governments towards disruptive technologies such as the sharing economy or self-driving vehicles. In addition to the expansion and costs of broadband Internet, the tax system and environmental protection also play a key role in the analysis. Accordingly, Austria performs particularly well in the fields of research and development, broadband infrastructure and favorable laws or regulations in the field of self-driving cars. Alongside Austria, the Innovation Champions 2018 include Finland, United Kingdom, Australia, Sweden, USA, Singapore, Netherlands, Canada, Portugal, Czech Republic, Denmark and New Zealand.