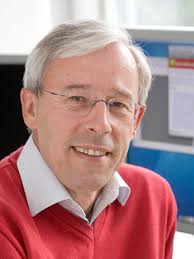 The quantum physics pioneer and visionary Peter Zoller was presented with the 2018 Willis Lamb Award for Laser Physics and Quantum Optics in the USA.

He received the award for his ground-breaking word in the field of quantum optics and quantum information. The award ceremony took place within the context of the Winter Colloquium at the Physics of Quantum Electronics Conference held in Snowbird, Utah. The award is named after the American Nobel laureate in Physics Willis Eugene Lamb, Jr. who laid the foundations in numerous fields of physics and technology. Among the previous awardees are numerous outstanding personalities in physics. Last year, for example, Rainer Weiss from MIT received this prize, who was awarded the Nobel Prize in Physics in December in Stockholm for his joint discovery of gravitational waves.

Peter Zoller is considered to be one of the most influential scientists in the field of quantum optics. With his ground-breaking discoveries and developments, he has combined quantum optics with various other fields of physics, opening up new avenues for the development of future quantum technologies. His pioneering work is driving the development of quantum simulators and quantum computers. Peter Zoller has already received many awards for his research. He is Professor of Theoretical Physics at the University of Innsbruck and Scientific Director at the Institute of Quantum Optics and Quantum Information (IQOQI) of the Austrian Academy of Sciences.