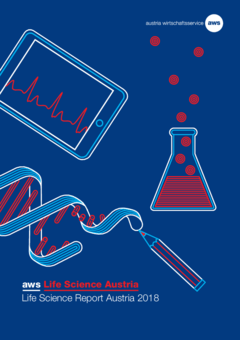 The life sciences sector in Austria has developed positively. The industry, which already accounts for 6.1 percent of the country’s GDP, generated record revenue of EUR 22 billion, a rise of 17 percent.

More than 900 companies (a rise of 11 percent) with a staff of close to 55,500 employees already operate in the sector. This was the conclusion of the Life Science Report Austria 2018, compiled by aws Austria Wirtschaftsservice on behalf of the Ministry for the Federal Ministry of Digital and Economic Affairs.

About EUR 290 million in fresh capital was injected into biotech companies in 2017. Revenue of the 127 biotech startups amounted to approx. EUR 313 million. The study was carried out for the first time since the initial study took place in 2014. At that time investments, funding and loans amounted to about EUR 87 million, and revenue was at EUR 198 million. The lion’s share of financing came from venture capital investors. Biotech firms raised about EUR 137 million in risk capital in 2017, comprising a three-fold increase compared to the year 2014. “In past years Austria has established itself as an internationally respected location for companies along the entire value chain. This dynamic development is also reflected, for example, in the extensive interest displayed by international companies which want to cooperate with national players”, says aws Managing Director Bernhhard Sagmeister.

Since 2007, PHIOS has been supporting prominent companies in the implementation of particularly challenging and complex software solutions. The Liechtenstein-based company is now opening a facility in Vienna, designed to serve as the base for building up activities on the Austrian market and neighbouring countries in the CEE region.

NFT and Blockchain Hub Austria: Austria as an Attractive Location for Innovation

In the meantime, crypto assets and the blockchain technology are no longer a peripheral phenomenon. More than a decade has passed by since the release of bitcoin in the year 2009 and crypto assets and the underlying technology are continuing their advance despite the many doubters. The recent past has shown that businesspeople enjoy a favourable environment in Austria to implement their ideas relating to blockchain, NFT and the like.