ING Innovation Index: Austria among the most innovative countries in the Eurozone 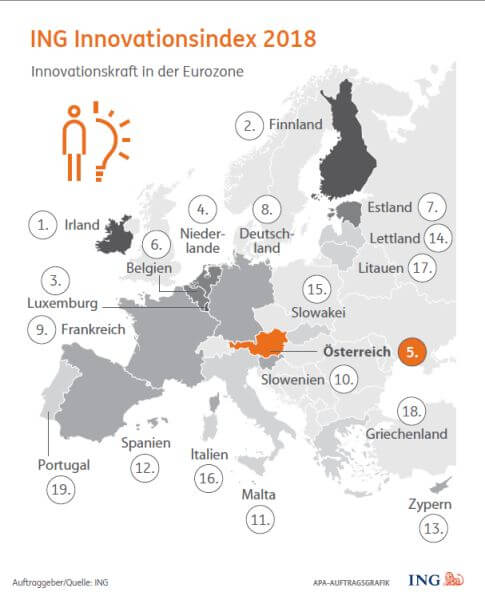 Austria ranks high in European comparison when it comes to innovative strength, in particular thanks to investments in research and development and the individual strengths of the nine federal states which complement each other well.

Austria is rated fifth in terms of its innovativeness. Ireland, Finland, Luxembourg and Netherlands are ranked as the top four. Germany placed eighth. Vienna leads the ING Innovation Index in the ranking of the Austrian federal states. The ING Innovation Index analyzes and assesses the current level of innovative strength of the 19 countries in the Eurozone on the basis of nine indicators.

Ireland’s first place ranking is due to its strong start-up scene, well educated people and the highest level of employment in high-tech businesses. Austria’s good ranking is mainly driven by its investments in research and development. In relation to its gross domestic product, Austria invests the most in R&D among the Eurozone countries. Austria also scores high with respect to patent applications and the potential of its youth.

Since 2007, PHIOS has been supporting prominent companies in the implementation of particularly challenging and complex software solutions. The Liechtenstein-based company is now opening a facility in Vienna, designed to serve as the base for building up activities on the Austrian market and neighbouring countries in the CEE region.

NFT and Blockchain Hub Austria: Austria as an Attractive Location for Innovation

In the meantime, crypto assets and the blockchain technology are no longer a peripheral phenomenon. More than a decade has passed by since the release of bitcoin in the year 2009 and crypto assets and the underlying technology are continuing their advance despite the many doubters. The recent past has shown that businesspeople enjoy a favourable environment in Austria to implement their ideas relating to blockchain, NFT and the like.