Vienna University of Technology: From outer space to the Earth without a parachute 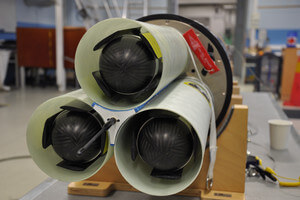 An ambitious rocket project featuring the participation of the TU Wien Space Team was successful.

Tubular measuring devices were dropped from outer space and returned to the Earth safe and sound without requiring a parachute. Students at the University of Würzburg and the TU Wien Space Team of the Vienna University of Technology joined forces for the Daedalus Project. The objective was to develop a device with which one could collect meteorological data simply and at a low cost. The altitude of about 70-80 kilometers is particularly interesting in this regard. This altitude is too high for weather balloons which can climb up to 30-40 kilometers, and this area of the atmosphere can only be poorly measured by satellites. The probes were transported into space within the context of “REXUS/BEXUS”, a partnership of the German Aerospace Center, the Swedish National Space Board and the European Space Agency.

The underlying idea for this new type of measuring device evokes the image of maple seed, which sink to the ground very slowly and gently due to their long wings. The three tubular probes of Project Daedalus are also equipped with wings to cushion their fall. “This time around our priority was to demonstrate methods. In the future, we also want to carry out scientific experiments in the atmosphere”, says Christoph Fröhlich, President of the TU Wien Space Team. A follow-up mission is in planning.

Storage and distribution for Eastern Europe is more economical from Vienna than from Prague or Budapest. Because shipping business between the individual reform nations is barely developed, whereas neary every Eastern destination is serviced from Vienna several times a week.