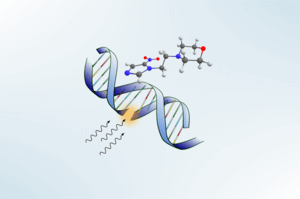 Different molecules are being tested in the field of radiation therapy in order to improve the effect of the radiation on cancer cells.

Researchers at the University of Innsbruck observed that slow electrons from nimorazole molecules are trapped in an extremely effective manner. These results can serve as an explanation for the selective effect of the active ingredient already applied in radiotherapy. At the beginning of the 19th century, the Viennese radiologist Gottwald Schwarz already realized that the oxygen in cells required for their survival also promotes damage done to them as a consequence of radiotherapy. Due to this property, a paradoxical situation arises for fighting cancerous tumours in radiotherapy. This is due to the fact that tumours form areas with a pronounced oxygen shortage as a result of their uninhibited growth. However, due to the lack of oxygen, these regions respond less to the radiation than healthy tissue does.

In order to counteract this effect, different molecules are being tested in the field of cancer medicine which are designed to imitate the effect of oxygen in tumours suffering from a low oxygen level. One molecule which has been successfully tested in clinical studies is the nimorazole molecule. "The experiments with individual molecules show that nimorazole trap slow electrons in an extremely efficient manner. The molecule is also subsequently characterized by a high level of stability by remaining intact", says first author Rebecca Meißner in the study published in the scientific journal Nature Communications.

Many of the biggest questions in physics can be answered with the help of quantum field theories: They are needed to describe the dynamics of many interacting particles. These theories are just as essential in solid state physics as they are in cosmology.

The comeback of plant-based active ingredients in medicine, cosmetics and food production has positive impacts on Tyrol as a business location. Austria has succeeded in playing a pioneering role in plant research thanks to the support of the federal government, the Federal Province of Tyrol, the company Bionorica and the University of Innsbruck. This niche in plant research already established itself in Innsbruck years ago.