Fight against cancer: New biosensor of the University of Innsbruck 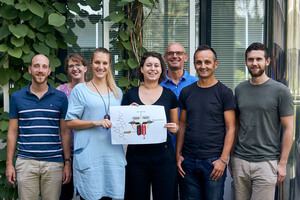 Kinases are enzymes which enable chemical processes in cells.

Signalling pathways in human cells can be impaired by mutations in kinases, which serve as molecular switches. Frequently the result is serious diseases such as cancer. A process developed by an internationally networked research team led by Eduard Stefan of the University of Innsbruck sheds new light on understanding these complex processes. The biochemists modified kinases and made them shine in order to be able to directly study their diseased functions in the cell.

Up until now, the consequences could only be observed through the change in the cellular signalling pathways or characterised outside of the cell. Understanding these cellular processes also has decisive consequences on personalized therapeutic approaches. Which active substance most effectively inhibits which particular kinase? The more targeted a medicine is used, the bigger is its likely success in a therapeutic context. The new process of the basic researchers in Innsbruck could lead to progress in personalised medicine and help in the search for new drugs to be used in the fight against various types of illnesses involving mutated kinases.

Thanks to its central location, excellent infrastructure and high quality staff, Austria is one of the key locations for ZTE Corporation and HQ for the Eastern Europe Region in general.

Since 2018, Silicon Austria Labs (SAL) has been enriching the European EBS ecosystem (EBS=Electronic Based Systems). The special feature of this research centre is that it conducts international oriented, multidisciplinary and collaborative research along the entire EBS value chain, from sensors to integrated systems.