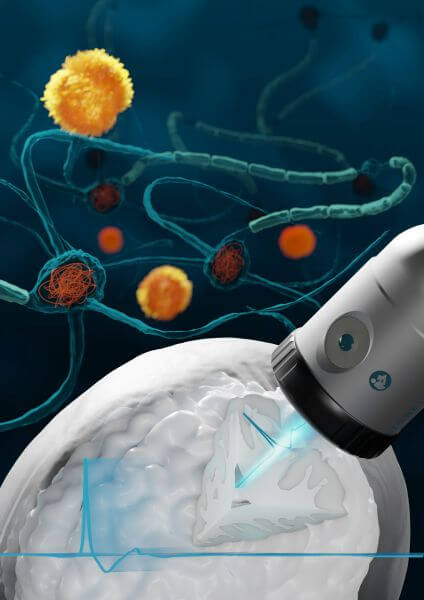 In neurological diseases such as Alzheimer's disease, Parkinson's disease or multiple sclerosis, brain neurons are constantly being lost.

In turn, this results in memory lapses, speech disorders, mood swings and reduced freedom of movement as well as muscle tremors in the case of Parkinson's, to name just a few examples. After six years of development, researchers led by Roland Beisteiner from the Department of Neurology at the Medical University of Vienna have developed a completely new method of treatment not yet seen anywhere in the world. Using a non-invasive ultrasound technique, it is now possible to reach all areas of the brain and activate neurons that can help to regenerate brain functions. The preliminary data, which has been prominently published on the international stage, show that this can improve brain performance. This has positioned Vienna as a world leader in an important sector of medicine.

The new method is called Transcranial Pulse Stimulation with Ultrasound (TPS) and was developed in collaboration with the Swiss commercial partner Storz Medical. "For the first time in the world, TPS enables us to penetrate into all areas of the brain by means of an ultrasound pulse delivered directly to the skull in a non-invasive, painless procedure, during which the patient is fully conscious, and to specifically target particular areas of the brain and stimulate them," explains Beisteiner. The stimulating pulse emitted by the ultrasound device is between 3 and 5 mm wide and approximately 3 cm long. An accurate "map" is first of all made of the patient's brain using magnetic resonance. "In the spirit of precision medicine, the area of the brain that is to be activated is very precisely targeted. These areas can be situated differently in each patient. Thanks to a navigation system, the treating neurologist can pinpoint on the screen where the pulse must be delivered and control everything very precisely," says Beisteiner. Six one-hour sessions over the course of two weeks were enough to bring about improvements in brain performance in the clinical pilot study, which was now published by the renowned scientific journal "Advanced Science" as a cover story.

Also read our blog, Coming back for seconds: Why big brands expand their (R&D) presence in Austria.

Many of the biggest questions in physics can be answered with the help of quantum field theories: They are needed to describe the dynamics of many interacting particles. These theories are just as essential in solid state physics as they are in cosmology.

The comeback of plant-based active ingredients in medicine, cosmetics and food production has positive impacts on Tyrol as a business location. Austria has succeeded in playing a pioneering role in plant research thanks to the support of the federal government, the Federal Province of Tyrol, the company Bionorica and the University of Innsbruck. This niche in plant research already established itself in Innsbruck years ago.